Posted by deborahrpark on 29 January 2013 under Social Studies

In her book, The Ancient Egyptians: Dress, Eat, Write and Play Just Like the Egyptians, Fiona MacDonald has a project for making an Egyptian collar that I just had to try. After all, it’s hands-on! 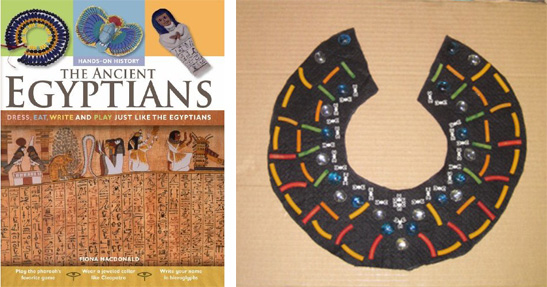 Using some old felt, I pre-cut the collars for the students. (I didn’t want them to cut the collars out of the middle of the felt and end up wasting some. I’m sure you’ve seen your students do that too.) I was glad I did, because when I cut according to the dimensions in the book I found they were too small for my students. After adjusting the measurements to the size I wanted, I cut one for each student using several different colors. 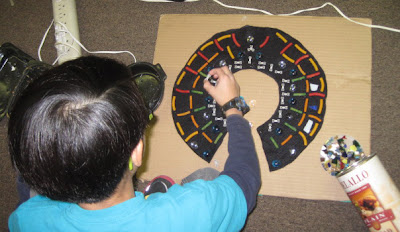 I then gathered some glass stones, noodles I had painted for another project, and other odds and ends to use for decorations. You know, out of the junk drawers that you keep like every other teacher?

Again, I didn’t follow the book’s directions to use white glue because I didn’t want the project to take so long to dry. I’ve also found that white glue doesn’t attach items to fabric very securely. Instead, I gave each student a hot glue gun to attach their decorations. First, though, I asked them to lay out the collar with everything that they want to put on it. The gluing process goes faster then, and the end product is better because the students have thought out their designs rather than just gluing things on randomly.

For the tie I also made an adjustment because I thought gluing it on (as the book directed) would come off too easily. Instead, I gave each student a large needle and some metallic cording to thread through each end of the collar and tie in a knot three times. It worked perfectly and will be more secure.

A word to teachers: Don’t think boys will dislike making these. I actually discovered that they lay out some very cool patterns.