How to Teach Public Speaking to Sixth Graders

Posted by deborahrpark on 02 April 2013 under General 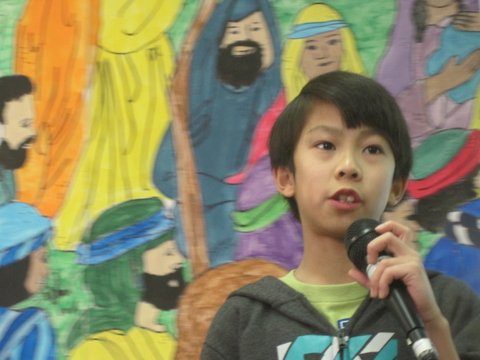 Many people’s first experience with public speaking comes in college, when they are required to take a course in the art of presenting. Public speaking is such a valuable tool though, that I want even my sixth graders to feel comfortable presenting material to large groups. Our annual student-led Week of Prayer provides the perfect opportunity for this. If you’re interested in scripts and other resources from this year’s program, Tales of the Kingdom, click here. You can also check out last year’s program, Son County Harvest Fair. In this post I’m going to focus on how I helped students learn their scripts. 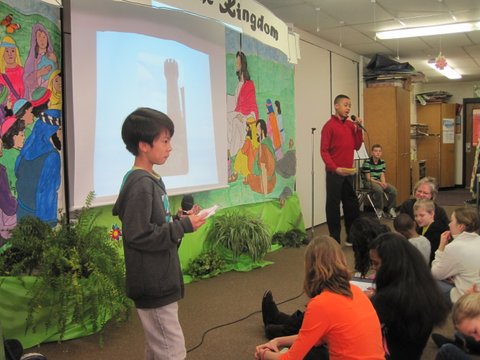 I then asked each student to write their script on a set of numbered 3″x5″ cards and put them on a ring. After they had a few days to practice reading from their cards, I asked the pairs to present their talks in front of me for the first time. By this point they are usually familiar enough with their script that I can begin teaching them how to use their voices to hold the audience’s attention. As they practice in front of me I try to point out areas where they can raise and lower their voices, speed up or slow down, or use pauses to add emphasis to their words.

Next, I spend time with each pair discussing what types of audience interaction or visual aids could make their talk easier to understand. For example I tell them that instead of reading a Bible verse themselves, they could have it on screen and invite someone from the audience to read it. Or instead of just talking about pearls they could give each student a fake pearl to hold onto as they listen to the story. Together we brainstorm and settle on which ideas each pair wants to use.

With visual aids in mind, I then challenge the student pairs to make a PowerPoint. In addition to making the presentation more interesting for the audience, I tell them, seeing certain things on the screen will help them remember their parts. My goal is to help them become as comfortable as possible actually speaking instead of reading from their cards.

I try to practice with each pair at least three times. Sometimes we are not able to make it through their entire script, but that’s okay. Often they only need coaching on a small part and they can then apply the principles to the rest of their talk themselves. The next step is having them practice presenting in front of their classmates. 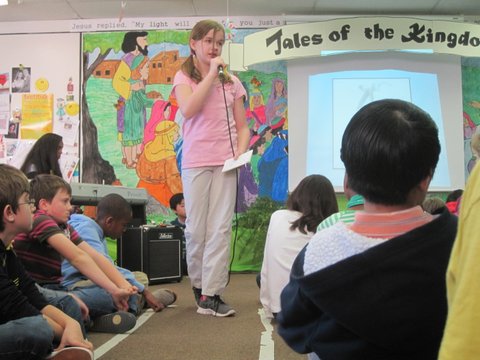 Because public speaking is so much more than the words that are said, also I try to teach my students how to move around the room when they talk. To do this, I tape pathways on the floor (and promise extra recess time if they make it to the end of the pathway and back at least once during their practice talk). After we practiced for several days, each speaker had at least six tries at completely giving their presentation, walking the path and everything.

The next time I worked with the pairs I had them underline or highlight key words and phrases on each of their cards so that by simply glancing at one they could know what it said. Some students did excellent at this and never needed to look at their cards when giving the real presentation. Others got a little nervous and did end up reading some cards. That’s okay too. As we were preparing I talked to the students about how our job is to do our best and offer ourselves to God, but then leave it to Him to take it and do what He wants. “Don’t worry about it after that,” was my constant reminder.

I offer the same advice to you if you decide to take this route on teaching your kids public speaking. Don’t be discouraged if at first things don’t seem to come together. I guarantee you’ll have kids who aren’t memorizing their lines, not making their index cards like you asked, or not walking around and speaking well. It takes practice, lots of practice. You have to direct them and show them everything. But I also guarantee you that it’s worth it. By the time our Week of Prayer came, I was able to step aside and let the kids do everything. They gave four presentations a day for five days, and they did it beautifully.
One of the most satisfying moments was when one of my students said, “You know, Mrs. Park, I think I really want to be a minister after doing this kind of thing. I feel good speaking in front of others.” To know the students are growing in confidence and spirituality is the best reward for me.

« Tales of the Kingdom: Week of Prayer Resources
15 Worship Songs with PowerPoints for Kids »